Unprecedented times call for unprecedented measures, it seems. On Monday 7 September, for the first time ever Queensland’s Catholic Bishops, led by the Catholic Archbishop of Brisbane, Mark Coleridge, held a press conference to make an announcement about the upcoming Queensland state election.

The announcement titled “A Statement by the Catholic Bishops of Queensland for the 2020 State Election” was made at the official launch of “THE COMMON GOOD IN A COVID WORLD”.

The invitation-only event at St Stephen's Cathedral, Brisbane was attended by politicians, journalists and Catholic dignitaries. The Opposition Leader, Deb Frecklington, was there sitting front and centre, and nine other LNP MPs were in attendance. Labor had fewer than half that number there, with the Government represented by Sandgate MP Stirling Hinchcliffe, Minister for Local Government, Racing and Multicultural Affairs. All three Katter's Australian Party state MPs were present. 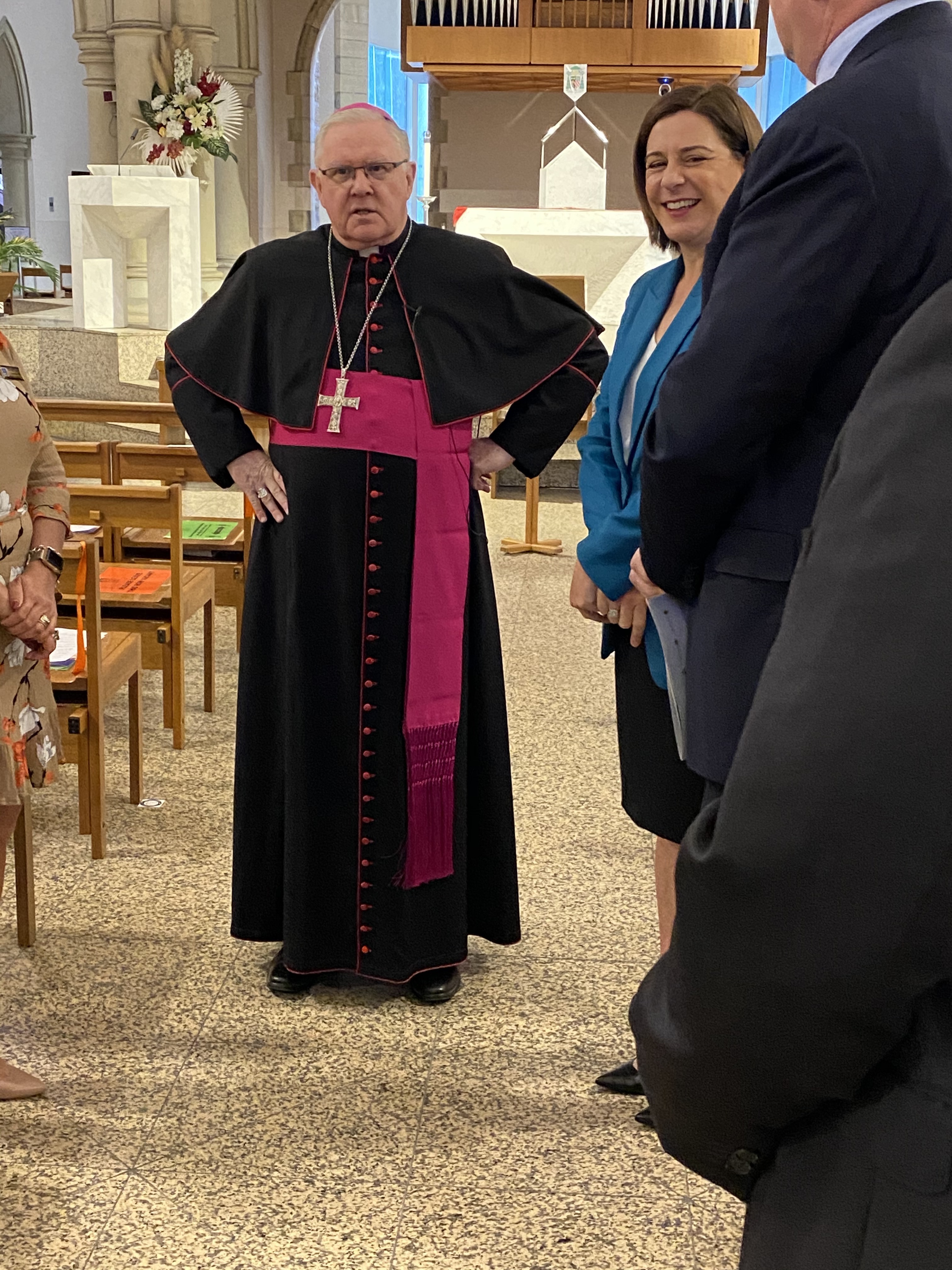 While some may wonder about the influence that statements from Catholic leadership may have on the Queensland election, it is of high significance. The 2016 census revealed that 56% of Queenslanders identified as Christian (of some denomination), which included over one in five Queenslanders being Catholic - the single biggest faith tradition in Queensland. This was the census when the Atheist Foundation ran a large national "No Religion" campaign, which led to the Australian Bureau of Statistics placing this choice as the first option and had the effect of many nominal believers from all faiths choosing "no religion" instead of the religion in which their parents had christened them. So it's safe to assume that the almost 22% of Queenslanders who identify as Catholic actually pay close attention to what their bishops say.

The prayers and statements made by Archbishop Mark Coleridge, Bishop for Cairns Tim Harris and Bishop for Toowoomba Robert McGuckin largely centred around Queensland recovering well from the scourge of COVID. The Archbishop made a point of saying they were not telling people how to vote, and he was non-partisan in his approach. A range of predominantly social issues was covered, including the beginning and end of life. Encouragingly, a booklet which was given to all in attendance, and can downloaded here, contained a very strong warning against euthanasia and a call for more palliative care services. It stated:

"To recognise human dignity is to value the lives of all people, including those at the beginning and the end of life. Euthanasia and assisted suicide puts some of the most vulnerable people in our community at risk by endorsing – even in law – the judgement that some people’s lives are no longer of value. The State Government needs to provide better funding and resourcing for palliative care so that all Queenslanders have access, not just the few. Access to palliative care for older Queenslanders receiving aged care, especially in regional and rural settings, is a critical area of need. This urgent need is highlighted at a time when there is pressure to legislate for euthanasia in the State Parliament. There is a dark irony in this at a time when the shadow of death looms over us at this particular time of crisis and the Government’s target of halving suicide rates in Queensland by 2026. Governments must also provide for sustainable aged care services, continue to improve the quality regulatory framework in aged care and provide older people and their families with choice and control over the services they receive." 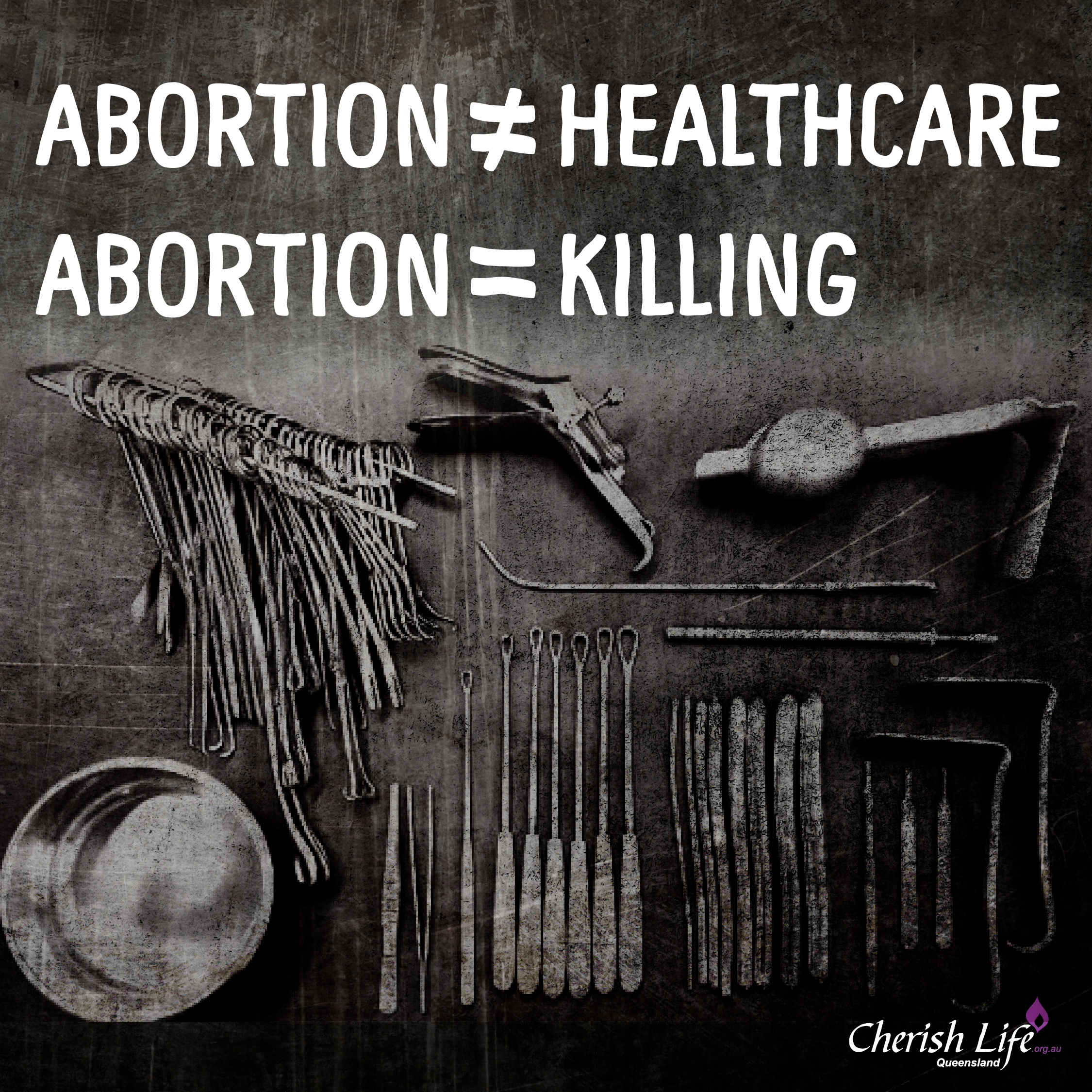 The booklet also contained a shorter statement on abortion, it read:

"We recognise the human dignity of unborn children and the great challenge many women face when confronted with an unexpected or difficult pregnancy. How can our community support women and their families in creating a more supportive and child-friendly community? What factors are causing women to take the agonising decision of abortion?"

This statement uncovered the cruel truth that many women who abort their babies do so because they feel that's their only choice. Abortion coercion is tragically common in Queensland, as is women feeling scared, isolated or without enough support including finances to give birth to their child. There are lot of unwanted abortions. This critical error of omission in legislation and policy is an aspect that must be urgently addressed if Labor is ousted from government and we have the opportunity make real change for unborn babies and pregnant women.

EXCLUSIVE: THE ARCHBISHOP ON THE BID TO ROLL BACK QUEENSLAND'S  ABORTION LAWS

At the conclusion of the formalities, Cherish Life Queensland executive director Teeshan Johnson was kindly granted a one-on-one interview with Archbishop Coleridge, and used the time to address the election issue of rolling back Queensland Labor’s abortion-to-birth laws. 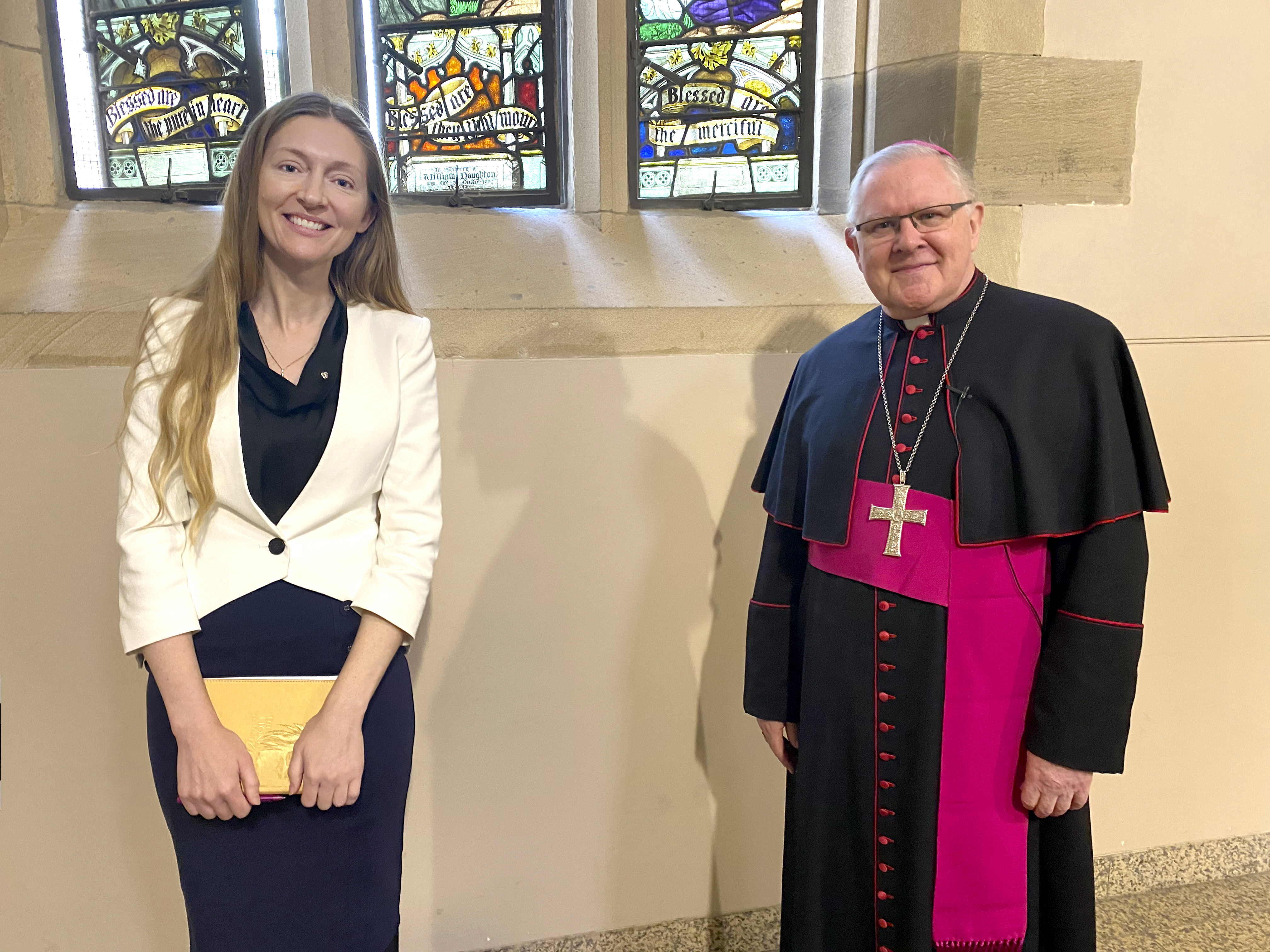 The Archbishop being interviewed by Teeshan from Cherish Life.

In response to a question regarding the Archbishop’s views on the LNP, KAP and One Nation all committing to review Queensland Labor's abortion-to-birth laws, Archbishop Coleridge said: “My thoughts were made very clear when the debate on abortion was going in the state [Queensland], and the church’s position is unequivocal on it. I think the legislation that was passed was seriously mistaken. I’ve made no secret in that. Therefore I would support legislative change.”

Asked about whether Catholic voters should consider the need to roll back these extreme abortion laws when voting, Archbishop Coleridge said abortion is a "very important" factor that needs to be considered by voters, and added: "The issues of life and death are unusually fundamental."

When asked whether abortion should be the number 1 voting issue for people of faith this election, the Archbishop said the recovery from the pandemic was the overarching issue this election, but added this "doesn't in anyway undermine the importance of abortion... To build a genuinely human world means to respect life and all its aspects." 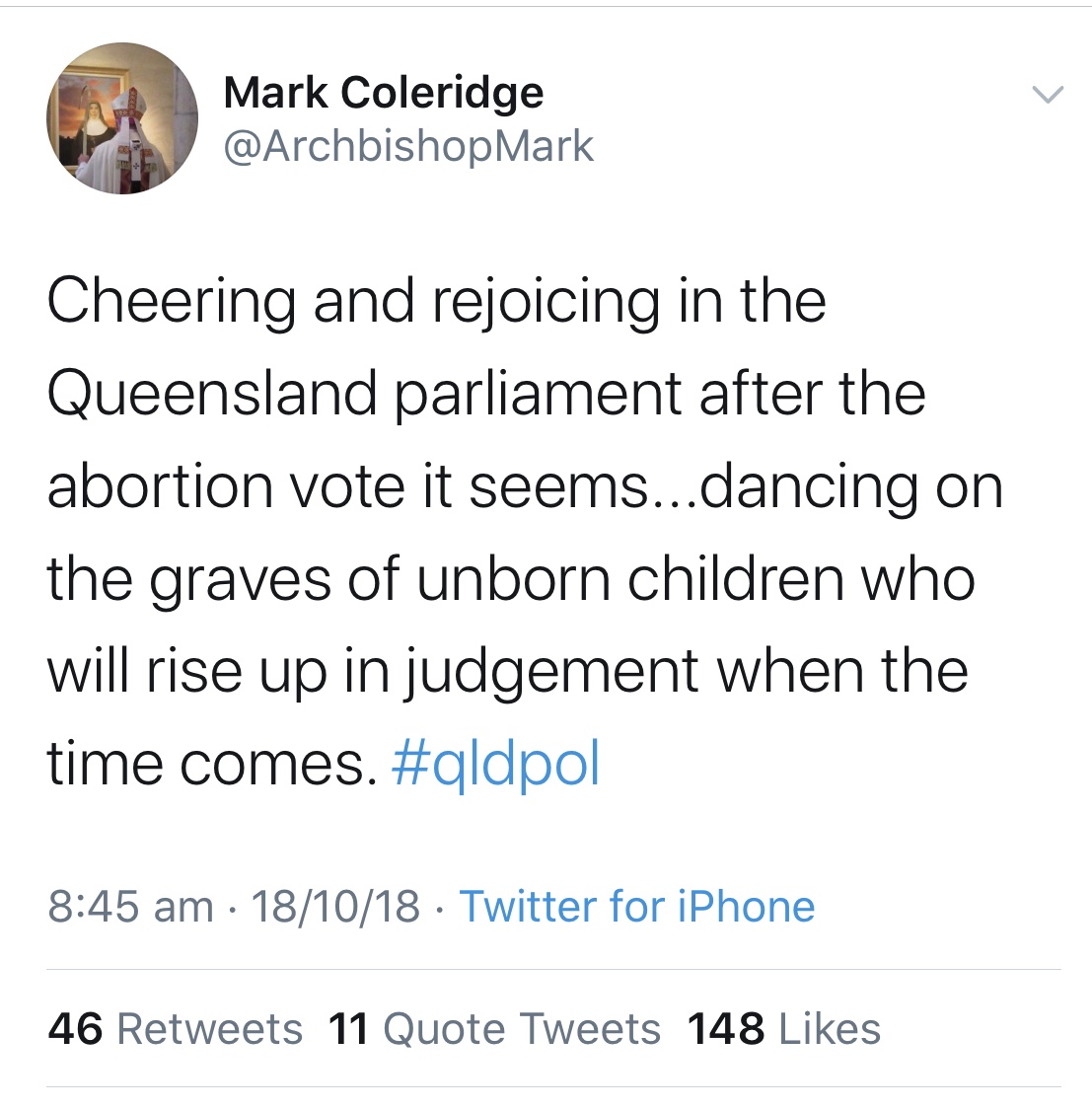 Archbishop Coleridge was understandably furious when the abortion Bill passed and he didn't hold back on Twitter.

Our additional thoughts: Politically speaking there is a lot riding on this election for the Catholic community. Catholic Health Australia, after the Queensland Government, is the largest provider of health services including hospitals, palliative care services and aged care homes in the state. Similarly Catholic Education is the largest provider of schools in Queensland after the State Government. Both Catholic Health Australia and Catholic Education receive considerable federal and state government funding as well as private funding. Meanwhile, The Greens party, which is contending for the balance of power this election (through supporting a minority Labor Government in a hung Parliament), is on a warpath to create a secular (and socialist) Australia. This includes a radical plan by Queensland Greens to "nationalise" - that is, make public - all Catholic and private hospitals and then force all hospitals to provide "free abortions", as well as cutting government funding to Catholic and private schools.

Cherish Life Queensland is grateful to the Catholic bishops for breaking with tradition and speaking before such a critical election for life.

We say, thank you.