On the morning of Tuesday 25 May, we held a mini-rally outside Parliament House to protest the terrible Assisted Suicide / Euthanasia Bill being tabled by the Premier that day. (This killing legislation is scheduled to be debated and voted on in September.)

With about 50 fearless friends answering the late (and discreet) call to peacefully stand for life, we held bold anti-euthanasia and pro-palliative care signs high, to send a clear message to politicians who were going into Parliament.

The media took great interest in our protest rally, and it was the lead story on every TV station that evening! The ABC even promo-ed the news with the voice-over saying "Protests over right-to-die legislation" showing footage of our rally. 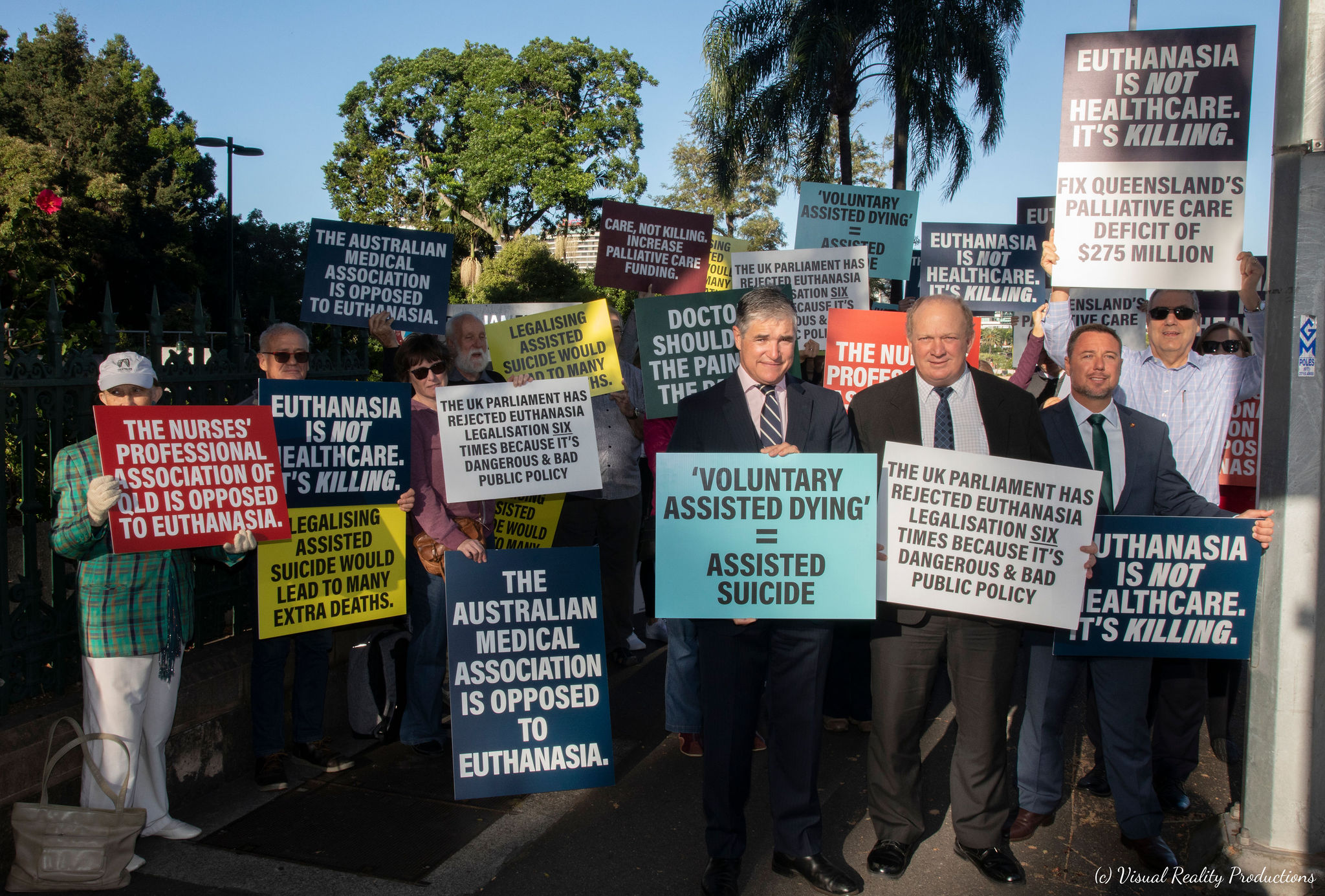 All the three Katter's Australian Party MPs - Robbie Katter, Shane Knuth and Nick Dametto attended the rally and shared words of wisdom, as did LNP MP for Maroochydore Fiona Simpson and Teeshan Johnson for Cherish Life.

Here is some of what was said, in order of speakers (and a video of the rally can be found here):

Robbie Katter, KAP MP for Traeger and the leader of the Katter's Australian Party: "It's very important that we fight it... I believe very strongly in the ripple effect in politics. Little things matter, little efforts matter. Those conversations you have amongst your peers done in a peaceful and respectful way can have a very large impact… We hope we can change the course of this in Parliament. It's very much a perversion of our moral responsibilities. We've passed laws about workplace health and safety, about driving laws to keep people safe.. there's the most enormous amounts of hypocrisy...we come back in [after they] passed legislation on killing babies, now killing our elderly..."

Nick Dametto, KAP MP for Hinchinbrook: "We've got MPs in there, to be fair, who do not understand the legislation they are voting for. It's our responsibility to share with them, not only our views but help them unpack it socially and morally before they go into the House to vote on this. We've got some time before this goes through the committee process as well as having a second reading on the floor of Parliament. That's everyone’s opportunity in a respectful way, to let those MPs know who haven't made their minds up, let them know what their electorate is thinking... Let them know... this isn't assisted dying, this is assisted suicide. This is going one step further than anyone in Queensland has ever done before... there were some disgusting laws that [came in] last term [on] abortion…We can make sure that as a group we make ourselves heard and keep up that fight."

Shane Knuth, KAP MP for Hill: "This is about getting the truth out there so people see what it [the assisted suicide Bill] is all about... Don't underestimate the role that you are playing here. Get an email to [your MP’s] office. We have a great chance of swinging this. Swinging this in the other direction, like the way it happened over there in England [the UK parliament has rejected euthanasia six times] and I believe that this is going to happen here in the Queensland Parliament, where this Bill is going to be defeated.. and we'll go about ensuring people can access proper palliative care. We'll make sure that people can access proper palliative care. Keep up the good fight, keep the message going and let's get this message going right across Queensland so we can swing it in the other direction and get this Bill thrown out."

Teeshan Johnson, executive director, Cherish Life Queensland: "We actually need some Labor people [MPs] to vote against this otherwise we're not going to hold. Whatever party your local MP is...they need to hear from you. Emails, phone calls, a meeting is actually best...When people understand what euthanasia actually is, that it is intentionally killing someone, it is assisted suicide.. this is intentional killing,... and it will lead to wrongful deaths. There will be more deaths in Queensland every year as a result. It's highly dangerous ... Palliative Care Queensland has said we need an extra $275 million per year, but the Government has only offered us for only 6 years an extra $28 million [per year] when we need an extra $275 million [per year] so they are trying to get out of it cheaply. It's outrageous..."

Fiona Simpson, LNP MP for Maroochydore:  "[We need to be] engaging people... even those that might believe in euthanasia, about the dangers of what this proposal is. What they are proposing is that you can access euthanasia if you have 12 months to live, but you may not get palliative care until the weeks or months before the end of life... so they are denying people from what they call a choice.. It's not a choice if you don't have proper palliative care." 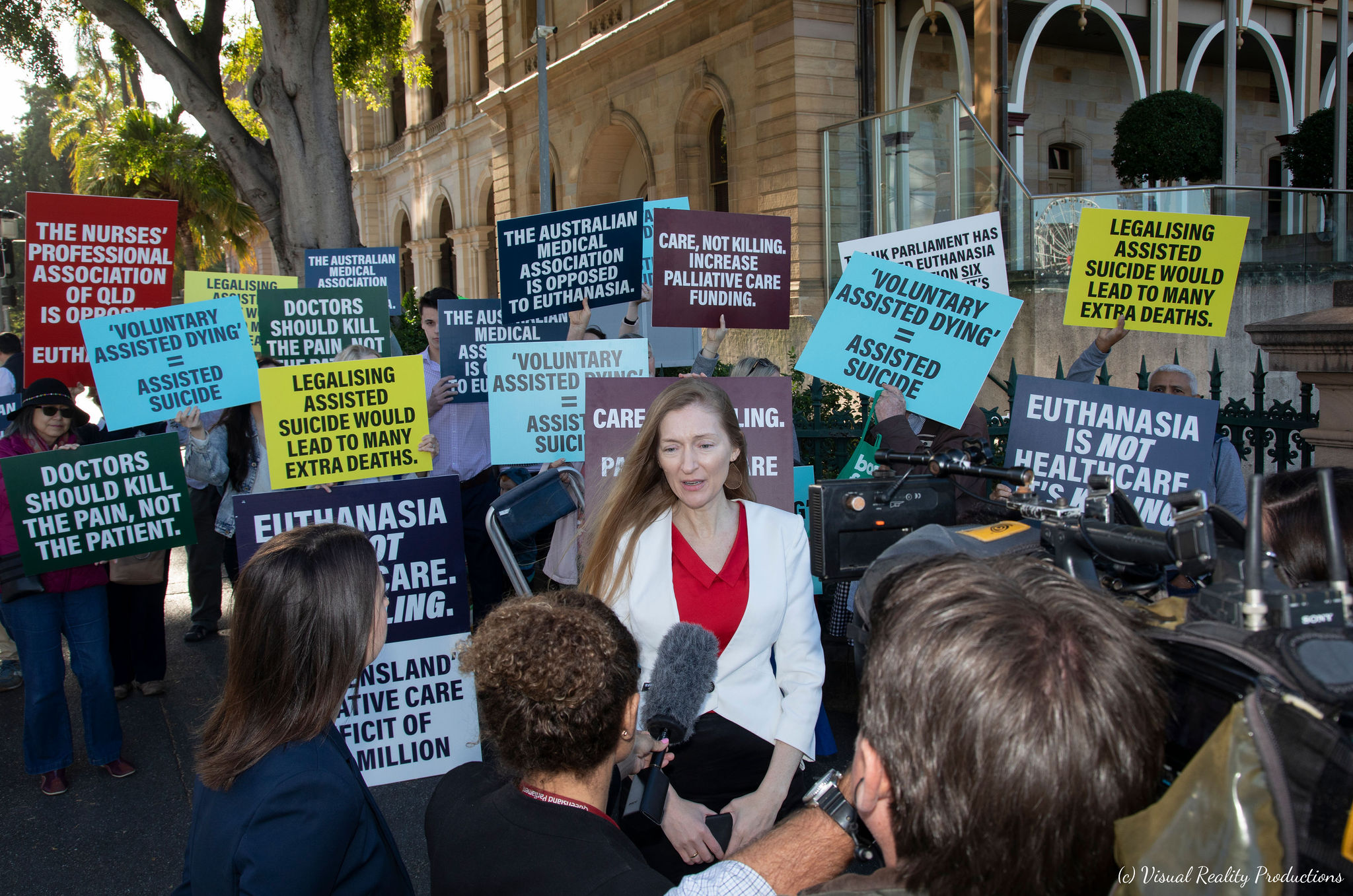 A video of the rally which captures all the speeches and some footage of the peaceful protestors can be found here (A special thank you to Visual Reality Productions for the wonderful video and photos.) More photos of the rally can be found at our Facebook page.

Against a backdrop of bias towards euthanasia evident in almost all mainstream media in Australia, we were encouraged that the side for life (and truth) had the opportunity to comment at all.

Here is some media the coverage for the day the Bill was tabled:

ABC Online on Tuesday 25 May published "Voluntary assisted dying legislation introduced to Queensland Parliament as protesters voice opposition" where we were mentioned: "Teeshan Johnson from Cherish Life Queensland said her group — which is also opposed to termination of pregnancy — said it was petitioning the government to further increase palliative care funding. 'This [the legislation if passed] will lead to wrongful deaths, and the real form of dying with dignity is actually world-class palliative care,' Ms Johnson said."

The Canberra Times, 7 News online, Victor Harbour Times and other regional papers ran a story written by Australian Associated Press journalist titled: "Queensland protestors urge free euthanasia vote" and on other sites "Queensland Parliament to debate euthanasia laws"  where the issue of conscience votes was discussed. We were mentioned as follows: "Cherish Life Queensland executive director Teeshan Johnson said the Bill won't pass if MPs were allowed a truly free vote. Ms Johnson claimed that while publicly allowing MPs a conscience vote on an abortion bill in 2018, Labor privately bullied MP Jo-Ann Miller after she voted against the laws. 'If Labor aren't given a conscience vote, they have the numbers to push this through,' Ms Johnson told AAP. 'But if it's a real conscience vote, it won't go through, that's really what it comes down to.'"