Have you ever wondered how we came to be governed by such hardline pro-abortion politicians?  Where did these extreme views come from and does the general public really want to have abortion on demand right up to birth? Or could there be other factors at play, like a covert group funnelling big money and politically aligned partisans into politics?

One US-based entity known as EMILY’s List is an organisation which has wielded its fair share of influence over politics both overseas and here at home but not many people are aware of its influence.

EMILY’s List (which stands for: Early Money Is Like Yeast) first began in the US in 1983 with the sole goal of “electing pro-choice Democratic women to political office”. Its poster child is none other than world-renowned abortion campaigner Hillary Clinton.

In the 1990s, it opened a satellite branch in Australia, right about when the extreme abortion agenda began making an appearance on the political scene here. Its head office in the US has a reported revenue of about $45 million a year. Its Australian branch has an income stream of about $350,000 – mostly from political donations.

Being a pro-choice female candidate is big business and there seems to be ample amount of funds and resources on hand if you toe the line.

It is self-branded as a positive influence for women, pushing equality and health care. But absolute access to abortion remains its priority.

EMILY’s List convener for Australia Tanya Kovac has stated “you have to be a pro-choice woman” to be part of the club. According to its website, it promotes its ideology through traineeships and mentorships, guiding the next generation of pro-abortion candidates to get into politics and wield their influence.

The organisation has successfully campaigned for many Labor women. Not surprisingly these well-heeled MPs and Ministers then use their positions of influence to kick considerable goals for the abortion industry.

Ms Trad was leader and main aggressor behind the passing of the state's Termination of Pregnancy Act, stating the decriminalisation of abortion was “personal” for her and the reason she joined the Labor Party more than 20 years ago. The Act was notably brutal, legalising abortion up until birth for any reason, removing all legal protection from unborn human beings. It also contained no safeguards for women considering an abortion like independent counselling, and mandatory checks against all too common abortion coercion.

In EMILY’s List, the abortion ideology aims to pull down every restraint.

The organisation for all intensive purposes is the political arm of the abortion lobby. In Australia there are around 90 EMILY's List politicians and in the Queensland state government 10, listed below. 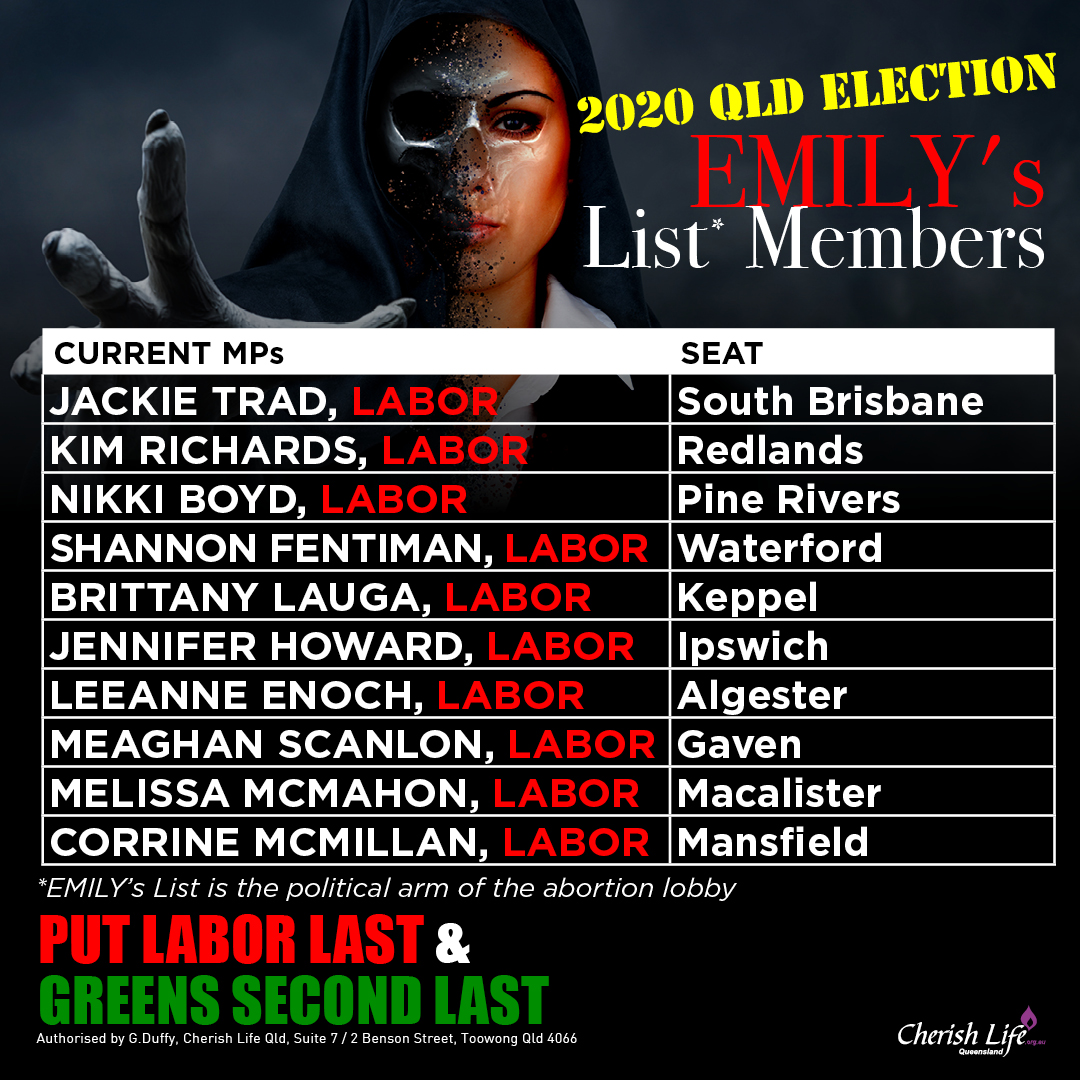 And the candidates of the 2020 state election 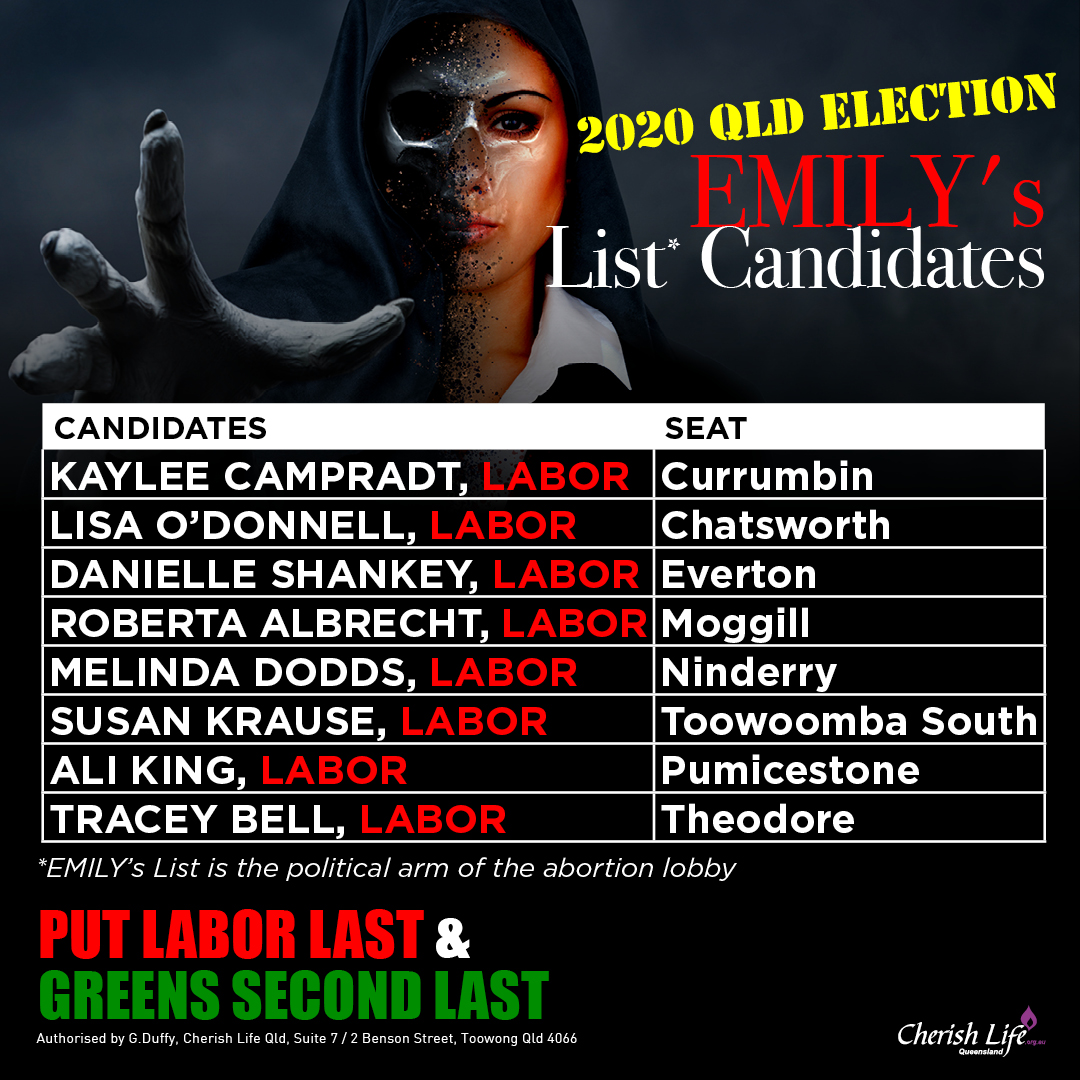 EMILY's List persuasive political push has been years in the making, gathering strength and speed before sweeping into our state and commonwealth parliaments. It's also had a contaminating effect on the Labor party, taking it to a very dark pro-abortion place.

EMILY's List members, all Labor, have had a hand in almost all Australia's extreme abortion laws.

The innocent victims in all this manipulation and false pretence of feminism are of course the thousands of the unborn babies who aborted in Australia each year, and their mothers who often are forever marred.

Remember at the upcoming 31 October election, a vote for Labor or Greens is a "yes" to keeping abortion-to-birth laws in our state. To change our states abortion laws, Labor has to go. Please put Labor last and Green's second last when you vote this election.