A NATIONAL FIRST: A "RIGHT TO LIFE" POLICY RELEASED BY ONP

It is unprecedented in Australia for any political party to issue such a detailed "Right to Life" policy.

"Right to Life Policy: Pauline Hanson’s One Nation acknowledges the scientific fact that a human being’s life begins in the womb. We were horrified when Labor passed the Termination of Pregnancy Act (2018) in Queensland, which legalised abortion up until birth for any reason. This law is one of the most extreme in the western world. One Nation will seek every opportunity to roll back Queensland Labor’s brutal and extreme abortion law, so both unborn babies and pregnant women will have a level of legal and medical protection in Queensland once again.

Their Right to Life policy can be found here and it's also pictured below. 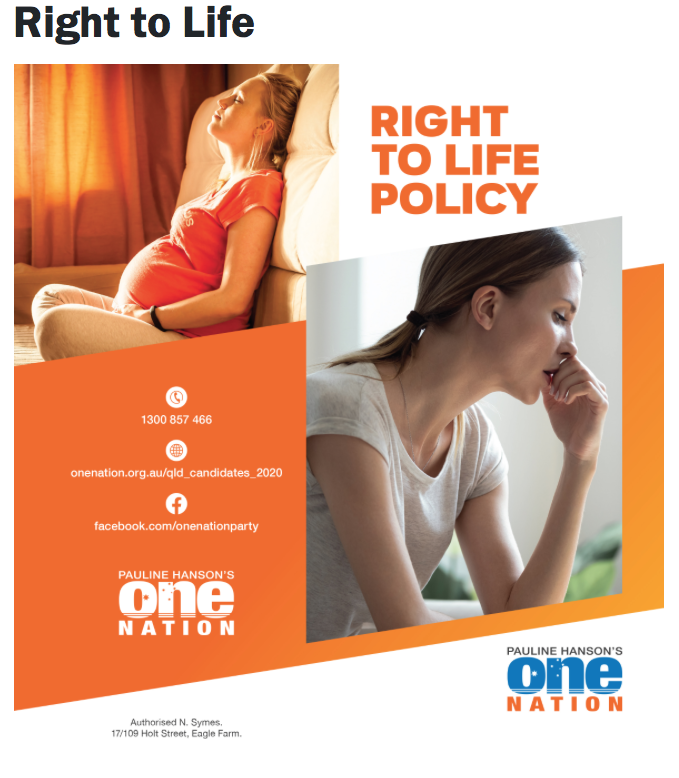 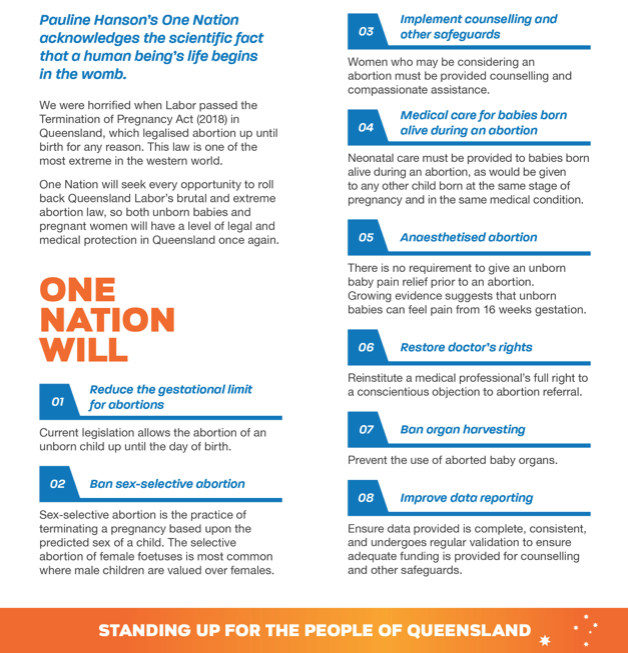 While Cherish Life is opposed to all abortion*, we welcome ONP's Right to Life policy as an encouraging movement in the right direction, away from Labor's cruel abortion up-to-birth laws.

Cherish Life is opposed to any destructive procedure to end an unborn human being's life, and therefore is opposed to all abortion. In the rare event a pregnancy must be ended early to save the mother's life, this is not deemed an abortion, but rather a life-saving intervention. Examples include the removal of an ectopic pregnancy which can be fatal if left unattended, and where a woman is suffering from potentially fatal pre-eclampsia, delivering the baby prematurely to save the woman's life.

If implemented the ONP policy would restore some much-needed legal protection and dignity to unborn babies, as well as providing practical supports and safeguards for women considering abortion, it also has the potential to save thousands of lives, particularly if the gestational cut-off for abortions is in the first trimester (up to 12 weeks) when most abortions occur in Queensland.

ONP's pro-life position (in comparison to pro-abortion Labor) is also likely to help them pick up another two to three seats at the 31 October election. Western Brisbane and central and North Queensland are particularly sensitive to the issue of late-term abortion previous polling and election campaigns have shown.

With the LNP, KAP and ONP now all committed to review or roll back Labor's Termination of Pregnancy Act (2018), abortion is clearly an election issue. Having commitments to fight for unborn life, to varying degrees, from mainstream parties with sitting members is an Australian first. There's a lot to be thankful for, and to fight for this election. We are close to getting our state's extreme abortion laws rolled back, and it's important we fight all the way until every vote is cast (as Labor / Greens will). Whoever you vote for, on the ballet paper - to vote for life - please put PUT LABOR LAST and GREENS SECOND LAST.

To contribute to the Cherish Life election campaign